Kia Motors Corp., the sister company of Hyundai Motors, revealed on Monday the first official images of the all-new 2021 Sorento SUV, ahead of its official public appearance at the coming 2020 Geneva International Motor Show to be held in Switzerland in March.

The carmaker said in a statement that the Kia Sorento 2021 adopted a new design concept, “Borderless Gesture”. Kia’s designers sought a combination of the “refined and delicate feel” of a sedan and the “strong design heritage” of its predecessors.

The Sorento, with its shorter front and rear overhangs, and a longer wheelbase, subtly adapted to make it look longer. Kia says the hood is longer, and the A-pillars are 30 millimeters further behind the front axle, creating a “cab-rearward” design.

The Sorento 2021 cabin also underwent a complete overhaul. Kia restyled Sorento’s interior to accommodate more space than previous models, offering a third row of seats while still having a trunk. The dashboard contains a digital instrument panel with a 12.3-inch screen and a multimedia center with a 10.25-inch display.

The seats are covered with leather trim, while ambient LED lights are located on the sides of doors and the console. There are also dedicated controls for ventilation and heating of the front seats to increase the feeling of comfort and luxury inside the SUV. 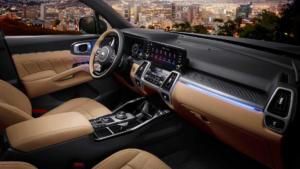 The new Sorento model resulted from the collaboration between three studios within Kia’s global design network. Designers from Korea, Europe, and North America joined together, basing the fourth-generation model on an all-new platform. The company expects to raise the standards for the midsize SUV market for efficiency, space, quality, and practicality.

The all-new 2021 Sorento will make its debut on March 3, 2020. Pricing and on-sale date were not yet disclosed.

Kia Unveils Teasers for EV6, Its First EV to Embody the Electrification Shift