Chat with us, powered by LiveChat

by KoreaTechToday Editor
in LG, Naver
0

Naver ended its first CES (2019)  event with positive reviews from many domestic and foreign audiences.

Naver and Naver Labs booths attracted more than 5,000 visitors for four days. It introduced ‘Ambient Intelligence’ technology that is based on location and mobility such as robotics, self-driving, mobility and others.

“Ambidex and Around-G(both robots) movements are becoming more natural each day. Although this technology is the first technology in the world, it has shown high level of perfection by stable operation.” 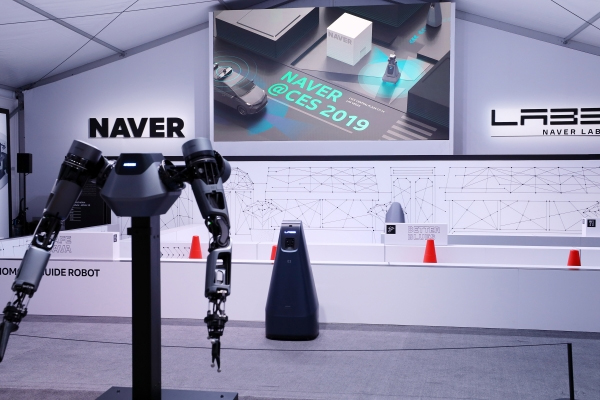 “The robot arm ‘Ambidex’, which was created by Naver, is the best robot among the robots in the CES,”

Professor Dennis Hong, a world-renowned researcher in the robot field

Foreign media such as AP, Daily Mirror, and CNET expressed interest in Naver. Prior to the event, AP and Market Watch covered the introduction of Naver and Naver Labs in detail. CNET chose Ambidex as one of the most exciting robot technologies available at CES 2019. The British media Daily Mirror praised the robot as a robot that can be used in both factories and homes based on its intelligence and safety. USA Today also introduced the most impressive technology and included a picture of Naver’s booth.

Get the latest from the biggest tech companies in Korea straight to your email. Subscribe now!