Using QR codes to pay for goods is expected to become a hit in Korea after seeing Kakao Pay‘s success. Seoul Metropolitan Government wants in with their Zero Pay pilot project.

There is a growing number of ways to make payments aside from cash and cards, including snapping QR pic on your smartphone. This effectively removes the step between the item being scanned and bagged.

The city government is leveraging its role as the tax man to encourage adoption. Zero Pay provides income deductions of up to 40%, but to get this users have to use 25% of their pre-tax annual salary with Zero Pay. Moreover, there is a 0% transaction fee which business owners will enjoy. This is because payment does not need to go through VAN(value added network) to be processed.

Card companies which profit from transactions are fighting back with their own QR services. They have in kind reduced fees charged to the merchant through QR payment while still offering card benefits.

Notable heavy weights jointly working together are  Shinhan, BC, and Lotte Card (will release their own version next month),  along with KB Kookmin Card  and  Hana Card are all racing together and against a dominant QR payment service. 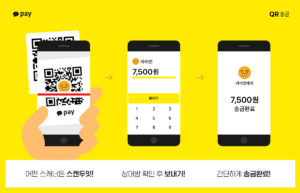 Kakao shares get hit as it receives criticism over market dominance