by KoreaTechToday Editor
in LG
0

LG Uplus made an announcement today that U+ Idol Live, a media platform that allows users to enjoy their favorite Korean idol bands, has surpassed 120,000 downloads (Android, iOS) a month after its release.

The cumulative number of U+ Idol Live visits per month since October was released, showing that there are more than 200,000 visitors. A strong K-pop culture has created demand for such related products. U+ Idol is expected to see more downloads due in part to global awareness of Korean cultural, also known as the ‘K-wave’. This is particularly true for boy and girl bands and their individual members, or more adequately defined as ‘idols’.

The major service of U+ Idol Live is broadcasting live video footage of famous K-pop groups. U+ Idol Live is different in that ‘Video of Member’ allows viewers to focus on an individual idol during a performance. The app also has ‘Video by Camera’ which shows footage of the front, side and back of the stage. Users will be able to provide their opinions by engaging in ‘Recommendations on Broadcasting’. 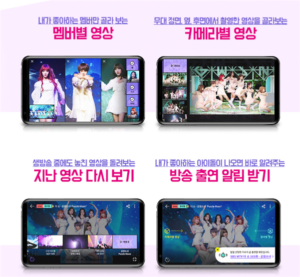 In essence, the application gives more control to the audience. K-fans are now able to decide which and how many cameras they will view performances from at any given time.

Analysis of U+ Idol Live users by age group, shows that 64% of all users are female. Within the 18 to 24 years of age group, which make up the bulk at 59%, 43% are female and 15% are male. Although females are the predominant users, males aged 35 to 44, known as ‘Uncle fans’, are slightly higher at 6%, than their female counterparts which are at 5%.