by KoreaTechToday Editor
in LG
0

LG Chemicals is going to invest $1.07B USD (1.2T KRW) to extend its facilities in China.

LG Chemicals made an announcement on the 10th that it signed a contract with Nanjing City to invest in battery plants. LG Chemicals has decided to invest $0.53B USD (600 billion won) into three large and small battery plants in Nanjing’s Shingang Economic Development District by 2020. 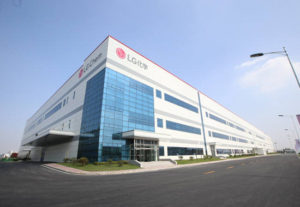 “We will actively foster three battery plants located in Nanjing as Asia and global export bases.”

For the past two years, the Chinese government has stopped providing subsidies for electric vehicles equipped with Korean batteries. As a result, South Korean batteries have been struggling in Chinese markets. Nevertheless, China is emerging as the world’s largest electric car market.

After 2020, the subsidy policy against Korean companies will also be abolished. It seems that LG Chemicals has decided to make investments in preparation for such changes in market environment.

In addition to the two battery plants in the Shingang Economic Development District that LG Chemicals decided to expand, it has been constructing two battery plants for electric vehicles in Binjang Economic Development District, Nanjing since October last year. It is going to invest $1.7B USD (2T won) by 2023, and secure yearly production capability of 35GWh that can supply batteries to more than 500,000 electric vehicles.